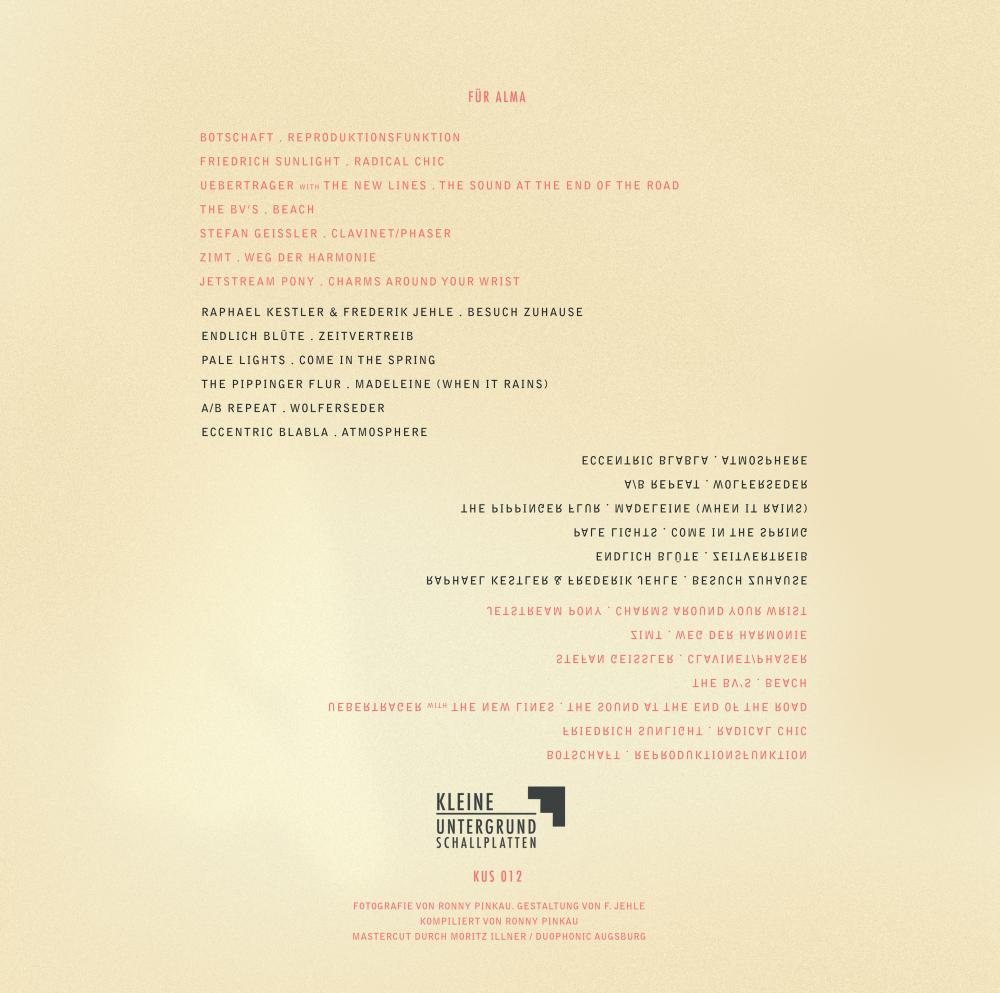 Ronny from Kleine Untergrund Schallplatten dropped me a line to say “I release at my label Kleine Untergrund Schallplatten the first label compilation with exclusive songs and recordings for the first time on vinyl. This release has the cataloguenumber KUS 012 and will be released on December 12th and is dedicated to my little daughter Alma she celebrates her 2nd birthday on this day and it’s the third year of my small label.

Now KUS may be small but as we never tire of saying it’s perfectly formed and Ronny has built up a wonderful family of artists, many of whom we have featured multiple times here on SWIT. In fact, if we had a “Label Of The Year Award” KUS would definitely win. [That’s a great idea. Ed]. So from SWIT to KUS let us wish you a happy 3rd-anniversary and also pass on our best wishes to Alma, I hope she had a super birthday.

As for the record itself, well it’s a fantastic reflection of the label. There ain’t a duff track on it. Here’s a quick rundown

3. Übertrager & The New Lines – The Sound At The End Of The Road
California dreaming, beachcombers weaving through drifting clouds of psychedelia. Fairytale ending. Wonka-esque.

4. The BV’s – Beach
The BV’s do what the BV’s do best. Here they do it even better. Bright, hazy and hooksome. Beach is special indeed.

5. Stefan Geissler – Clavinet/Phaser
Clavinet/Phaser indeed, as if that’s all it was. This is an intricate, arresting and unexpected soundtrack for stately homes and for kids sliding down bannisters.

7. Jetstream Pony – Charms Around Your Wrist (The Softies Cover)
If SWIT had a band of the year award I would definitely award it to Jetstream Pony. This is a bang-on cover, with gallons of charm. Unmistakably Pony.

9. Endlich Blüte – Zeitvertreib (backing vocals by Janina of Zimt)
What a Blüty! Ain’t Janina got such a lovely voice?

11. The Pippinger Flur – Madeleine (When It Rains)
An exquisite pleasure has invaded my senses.

13. Eccentric Blabla – Atmosphere (Joy Division Cover)
Eccentric doesn’t quite cover it. It makes me think of Nancy Sinatra fronting the VU. Stunning. What a way to finish.

Go buy it now over at Kleine Untergrund Schallplatten (if there’s any left!)